Beer is an alcoholic beverage made by fermenting starches. It is the third most popular drink after water and tea.

What most people think of as beer is malted barley which is fermented with yeast, and flavored with hops.

Beer is typically between 4% and 6% alcohol, but varieties exist with less than 1% alcohol, others go as high as 20%.

Beer has been brewed since well before recorded history.

Pure beer, according to German law, uses only barley, hops and water. Called “Reinheitsgebot” This is the oldest food regulation in the world, and is still on the books today. 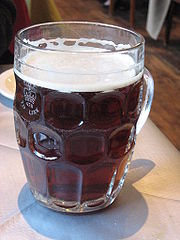 There are many other perfectly valid varieties of beer. The starch is usually derived from cereal grains, most often malted barley. Wheat, corn (maize) and rice are also widely used.

For those who have a gluten allergy or celiac disease, most beer is problematic. There is now a growing trend for an alternative market in gluten free beer. Instead of cereal grains, these beers more often use pseudograins such as buckwheat, millet and sorghum, or other starch sources such as cassava, potato and agave.

Like any alcoholic beverage, beer must be taken in moderation.

Beer consumption has been associates with a reduction of stress, cardiac disease and stroke.

Over consumption can lead to alcoholism, liver damage and other health problems.

For those with a yeast allergy, beer, like wine, is off limits.

Beer is generally nutritious. It is an excellent source of magnesium, selenium, potassium, phosphorus, biotin, and B vitamins.