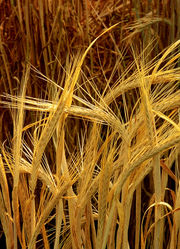 Of the main cereal crops (wheat, barley,oats and rye), barley is probably the least commonly used in day-to-day food. It is often used to make beer and whisky.

As a food, barley is most often used in soups and stews. In Asia, is boiled to make barley water, a popular drink which is ideal for hot weather.

Barley can grow in cold conditions, which is why it is a staple crop in Tibet (they also grow wheat there, so if you are allergic to wheat, Tibet is not actually a perfect destination for you).

Barley is a flavorful, tasty, chewy grain. It can be cooked like rice and served on the side with meat and vegetable dishes, much like rice.

Barley contains gluten and must be avoided if you are celiac or allergic to barley.

If you are allergic to wheat, you may still be able to eat barley (I do).

If you have just discovered that you are allergic to wheat, it is best to eliminate barley from your diet for several months, then re-introduce it to see if it causes you trouble or not.

Barley is a good source of fiber, selenium, phosphorus, copper and manganese.

Barley is a grass. Besides being related to your lawn and bamboo, grass is also related to the following food crops because they too are grasses:

Refuse: 0%
Scientific Name:
NDB No: 20006 (Nutrient values and weights are for edible portion)

I went to a lovely restaurant last night. I have Coeliac disease with lactose intolerance. I had told them before I visited and they pointed out what I could have from the menu. One of the recommendations was barley risotto! They convinced me that it was gluten free barley so I ate and enjoyed the dish. However, I have had the usual reaction to gluten!! Before I point out their error on the menu (it is marked n the menu as GF), is it possible to get gluten free barley and therefore I have had a reaction to something else???

Barely contains gluten. Period. There is debate about oats, but not barely. The people at the restaurant are misinformed.
I know it’s hard, but you have to be sure of yourself and if in doubt, leave it out, no matter how nice and confident the restaurant staff are! It sure is frustrating though when you get led astray (this has happened to me many times over the years and I have finally learned my lesson).

I was diagnosed with a Barley allergy after a recent allergy test. My health has been in rapid decline, I’m a 33 yo male. I can’t get away from Barley and I’m very frustrated. It’s in almost all store bought bread, all wheat flour mixes, all cereal, and many seasonings I enjoy. This allergy is destroying my life. If anyone knows good resources to find non-barley foods, please share. I have to make everything myself now.

Gluten-free should be barley-free. It may be unnecessarily restrictive, but would be a good first step, other than home-made items, until you can find suitable replacements of your favourite foods.

The good new is that making everything yourself leads to much healthier food. It is time consuming though.

My son is allergic to soy and malt barley Is there a bread i can buy without soy and barley?

You didn’t answer my question – does barley cause loose bowels?

If you have celiac disease, or you’re allergic to barley, it may cause loose bowels. Depends on the person.

I just read this article, and although I am thankful for the information provided, I have been researching and eliminating barley from my son’s diet for two and a half years now (he is four), because he was diagnosed with a barley allergy at a year and a half old. The thing I find misleading about your article, is that you say barley is probably the least commonly used in everyday foods, of all the grains you listed. I find this to be misleading because barley is really in a lot of places one might not suspect. While it is very commonly found in beer or whiskey, and that is kind of a known, it is also very commonly found in everyday foods like bread, cereal, cookies, etc. The main reason for this is that most flour that you buy in the grocery store, lists malted barley flour as one of the main ingredients. Because of FDA requirements on labeling, companies are not neccessarily required to specifically list that the flour they used to make their bread contains malted barley flour. Nor do most labels tell you that malt is made from barley (always), and/or corn. I find barley in almost as many things as I find wheat in. Although I can’t seem to find anything on it right now, when I first started researching barley, I was finding that dextrose and maltodextrin are sometimes derived from barley (most often from corn, maize, rice, etc) as well. Those are two sweeteners that are in everything. Anyhow, thank you for the information you provided, I hope you found this information helpful as well.

I see your point.

It is certainly less common than wheat, but just as sneaky.

In the end, it doesn’t really matter if a particular ingredient is less or more common than another; if you’re allergic to it, watch out for it everywhere!

What are other names given to barley that you should watch out for on ingredient lists?

The main one I am aware of is malt or words similar to malt. Malting is a process, usually applied to barley, so if you see malt it usually means malted barely.