This article looks at the various types of gluten related disorders. There is a separate article on wheat allergy which is different from a gluten allergy.

The diagram below shows the different gluten diseases and this article will explain each one. 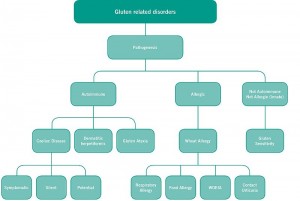 Gluten can trigger several autoimmune diseases for those who are predisposed to them. These include:

If you have Celiac Disease consuming gluten will trigger a range of celiac disease symptoms. This can be a serious disease but there seem to be mild and severe cases. The classic symptoms affect the gut, but some people have no apparent symptoms yet develop other diseases such as a thyroid condition or diabetes caused by the celiac disease.

Dermatitis Herpetiformis, also known as DH or Duhring’s Disease, is a skin condition characterized by watery fluid filled blisters. The name does not refer to the herpes virus, but rather the similarity between herpes blisters and DH blisters.

It is similar to celiac disease and probably genetic, meaning if you have the genes for DH and eat gluten, you will get DH symptoms.

Ataxia is a neurological condition, a lack of voluntary coordination of muscle movements. There are many causes, one is caused by gluten and this is the most common type.

Gluten allergy can come in a number of forms, including:

Respiratory allergies to gluten may afflict people with high exposure to flour in the air, such as bakers.

This is basically a contact allergy to gluten. Not considered common.

Some people find that cutting out gluten makes them feel better, yet they have neither an autoimmune disease such as celiac, nor a gluten allergy. Basically, they have gluten sensitivity.

What is your experience with gluten and health problems? Please leave a comment.