Candida albicans is the type of yeast responsible for yeast infections in humans. It is different from baker’s or brewer’s yeast which is used to make food.

Candida albicans is not harmful in small amounts, and is normally found in healthy people, particularly in the mouth and gut. The problem is when there is too much of it, known as “yeast overgrowth”. Other than that, it is not particularly harmful, but it isn’t helpful either.

Candida yeast cells can operate in a number of “modes”. For example the WO-1 strain can form a yeast colony growing as tiny white round cells, forming smooth white colonies. Another colony might grow as tiny opaque rod-shaped cells, forming flat grey colonies. Both colonies might be the same strain, ie have exactly the same genetic code. Another strain, 3153A, has seven different “modes”, known as phenotypics, i.e. different cellular morphologies.

Candida can form chlamydospores. These are cell clusters protected by a thick wall, at least thick for a microscopic cell, which isn’t very thick at all compared to a human hair. They can survive in a sort of suspended animation state when conditions aren’t so good for the usual yeast cell life cycle. 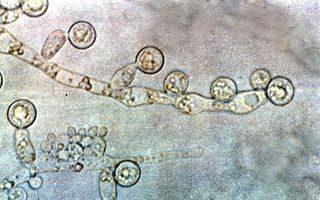 There are two forms of candida albicans. Both are the same species, but it can grow differently under certain conditions. Normally, they grow as individual and Independence yeast cells but they can form filaments and start  invading the host. This can happen  if your body is out of balance, for example eating too much sugar, or it could happen if the immune system becomes repressed, such as having radiation treatment or one of several nasty diseases.